Before Donald Trump endorsed Ohio Republican Senate candidate JD Vance this month, in the former president’s most high-profile intervention in the US midterm elections so far, he discussed the race with a mutual ally: the billionaire tech investor Peter Thiel.

Thiel was one of the biggest donors to Trump’s 2016 campaign but sat out the 2020 presidential election. Now, the German-American financier is re-emerging as an influential force in this year’s Republican primaries, cutting cheques of more than $10mn for two of the top hardline Trump-friendly Republican Senate candidates, Vance in Ohio and Blake Masters in Arizona.

On Tuesday, Thiel will face his first big test as Republican political kingmaker when Vance, the venture capitalist and author of Hillbilly Elegy, who used to be critical of Trump but has since recanted, squares off against a clutch of rivals vying for the party’s nomination to fill the seat left vacant by Rob Portman, the former Bush administration official.

Should Vance prevail, it could potentially embolden Thiel to take an even more active political role during the rest of the 2022 election cycle and even heading into 2024. “JD is sort of the experiment,” said a Republican fundraiser who knows Thiel and has been working with one of the two Senate candidates the tech billionaire is backing. “Right now it’s just a lot of hype [about Thiel’s influence]. We’ll see what actually happens.”

Big money has been a feature of this year’s Ohio Republican Senate race, fuelling a dizzying sequence of attack ads that have flooded the airwaves in the state. Most feature candidates targeting each other for not being sufficiently conservative or close to Trump.

Thiel’s support for Vance is up against heavy funding from the Club for Growth, a staunchly conservative anti-tax group, for Josh Mandel, the former state treasurer who had long coveted Trump’s endorsement.

“The Club for Growth, it’s a DC organisation that spent $10mn against Donald Trump in 2016 and has now spent close to $10mn in this primary in 2022 to try to prevent me from getting elected,” Vance said during a campaign stop in Grove City, south of Columbus, last week. “This is the fight that we’re having.”

But on the stump, Vance makes little mention of Thiel. “I don’t think it would go over very well with Ohio voters,” said Mike Gibbons, an investment banker from Cleveland who is also competing in the race and has ploughed his own money into the contest. “How do you think Ohio voters think of someone coming from California associated with Big Tech?”

Thiel is best known for being a co-founder of PayPal and a longtime director at Facebook, the social media group now known as Meta. But he has been edging away from the heart of Silicon Valley; he has shifted his home to Los Angeles and is expected to step down from the Meta board. A spokesperson for Thiel did not respond to a request for comment.

According to people who have worked with Thiel, he largely eschews the armies of political consultants, bundlers and fundraisers who dominate other major political fundraising operations. While he bet big — and won — on Trump in 2016, pouring more than $1mn into the Republican candidate’s campaign, he has also swung and missed. The tech billionaire put hundreds of thousands of dollars into the failed 2020 Senate bid of Kris Kobach, a controversial anti-immigration Republican who lost in the party’s primary.

One Republican consultant who knows Thiel stressed that the billionaire’s decision to give exceptionally large sums of money to Vance and Masters was largely due to his pre-existing personal relationships with both men, rather than a move motivated purely by ideology.

“I don’t think this is some sort of Koch brothers, [George] Soros kind of thing,” the consultant said.

But Thiel is nevertheless heavily involved in his own political operation. A person close to Vance’s campaign confirmed that Thiel had spoken multiple times to Trump over the course of the Ohio race, and that Vance, Thiel and Trump had all met together at Mar-a-Lago ahead of Vance’s run — an opportunity for Vance to make amends with the ex-president following his previous criticism.

Thiel recently gave an additional $3.5mn to Vance’s bid following Trump’s late-April endorsement, while he hosted his own fundraising event for Vance in Ohio this year, with tickets for the “small group dinner” going for $10,800.

In June, Thiel — who purchased a home in the Washington DC area last year — will co-host a fundraiser for Masters, a Republican Senate candidate in Arizona and Thiel’s former de facto chief of staff, at the Virginia home of Republican donor Michelle Olson, with tickets for $5,800 a person. The Arizona primary is scheduled for August.

Rob Jesmer, former executive director of the National Republican Senatorial Committee, said that while other big-name donors had gained attention for giving large sums to various party and candidate political action committees, no one had really done what Thiel had.

“Peter is an ideas guy,” said a Republican fundraiser. The next step for him “is figuring out how ideas become policy and how ideas and policy come together.”

For all of Thiel’s financial firepower in the Ohio race, however, Gibbons said it had not been having a huge impact until Trump’s endorsement of Vance came in this month. 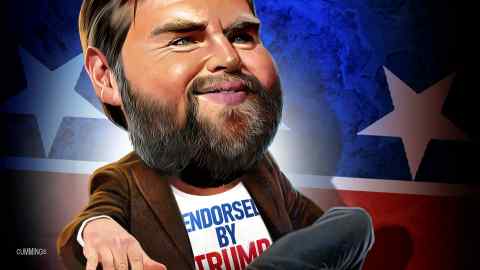 “I was concerned [Vance] might be a ‘Rino’ — Republican in name only — hobnobbing with the rich elite leftists,” said Bob Beisel, a 60-year-old Ohio financial services professional. “But the more I get to learn about him, and I think the more President Trump brought out his inner strength, I tend to believe that he will hold on to his principles in a way that a lot of other Republicans have not.”

“An endorsement from Trump shows me that he’s not with the establishment,” added Seth Sias, a 27-year-old real estate investor walking on Grove City’s main drag. “I think that he’ll do things that other politicians won’t do.”

JANA wins two board seats at software firm New Relic. This is what may be ahead

This Pre-ICO Could Be Amongst Most Newsworthy In 2022