Back on August 11, Fed’s Kaplan said “he was in favor of announcing a plan to taper at the Sept meeting and start tapering in October”.

Today near the start of the NY session, Kaplan in an interview on FOXBusiness said:

That softening of the tone from one of the more hawkish Fed president’s, had traders thinking about next week’s Jackson Hole symposium where Fed’s Powell is scheduled to speak. The market has been preparing for the possibility that Powell would use the opportunity to tilt his bias more toward the sooner rather than later side.  However, if Kaplan has reservations, the Fed chair would certainly not change his mind so soon. That is not to say, that the Fed would not start to taper in 2022. It will more likely wait for a clearer picture. (*** The Kansas City Fed just announced that the Summit will be held virtually and NOT face-to-face due to the Delta variant threat. That symbolic action, may be casting the vote for the Fed toward no announced taper now or most likely the September meeting too).

As a result, stocks which were negative in premarket trading, turned positive by the open. As the day went on, flow funds moved back into the NASDAQ index, closing higher by 1.19% which was the largest gain in four weeks. The Dow industrial average rose by 0.65% and the S&P index rose by 0.81%. Nevertheless, the major indices did still closed lower for the week. The Dow at its worst week since mid-June as it felt -1.11%. The NASDAQ for the week fell -0.73% and the S&P fell by -0.61%.

In the European equity markets today, they two recovered from earlier losses and closed  higher on the day (the Italian FTSE MIB did close near unchanged).

Below are the ranges and changes for the major North American and European indices:

In the forex market today, the US dollar started strong on the day on flight to safety flows (the CHF was also one of the strongest).  By the end of the day, the greenback had given up most of its gains verse the CAD, AUD and NZD (closed up just 0.02 to 0.12% vs those currencies after being up 0.28% to 0.56% in each of those pairs). The dollar was lower vs the EUR (-0.26% vs +0.03% at the start of the day) and -0.17% vs the CHF (was near unchanged at the start of the day).  The weakest currency was the NZD.  The CAD which started the day as the weakest is closing mixed. This was despite the seventh straight decline in crude oil prices today. 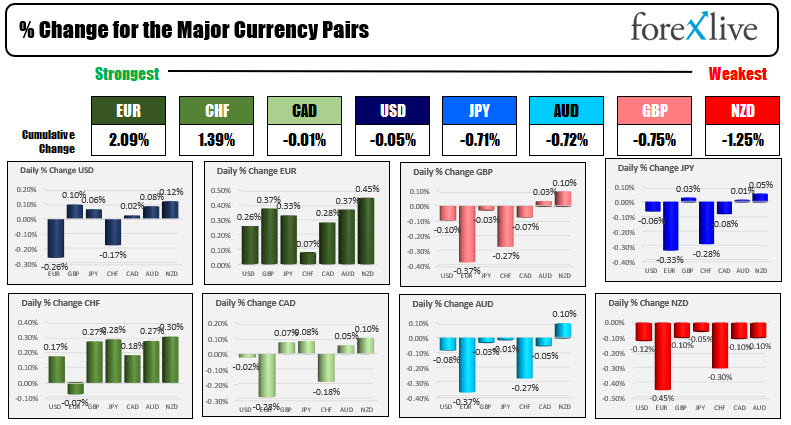 In other markets today:

What carried interest is, and how it benefits high-income taxpayers