Emmanuel Macron is to be re-elected for a second term as French president after defeating his far-right rival Marine Le Pen in the second round of voting, according to projections by polling agencies based on early returns.

Le Pen conceded after the projections on Sunday showed Macron winning more than 58 per cent of the vote, but she vowed to fight on with her Rassemblement National party in elections for the National Assembly in June. About 28 per cent of voters did not turn out, the highest level of abstention since 1969.

Speaking to cheering supporters in front of the Eiffel Tower in Paris, Macron acknowledged that he would continue to govern a divided nation in his second term after so many backed his rival or failed to vote.

“Our country is beset by doubts and divisions,” he said. “Today’s vote requires us to consider all the hardships of people’s lives and to respond effectively to them and to the anger expressed.”

Victory for Macron, first elected in 2017, will mean continuity in economic and foreign policy, and comes as a relief to investors and to France’s EU and Nato allies in the midst of the Russian invasion of Ukraine. A win for the Eurosceptic Le Pen, who wanted to pull France out of Nato’s military command structure, would have been a geopolitical earthquake akin to Brexit or the election of Donald Trump.

But the far-right has not performed as strongly as this in France since the second world war, and Macron will preside over a deeply fractured society. More than half of voters in the first round two weeks ago voted for nationalist, Eurosceptic candidates of the extreme right or left.

“This evening’s result represents in itself a stunning victory,” said Le Pen in her concession speech. “For French and European leaders it is evidence of a great defiance towards them by the French people that they can’t ignore, and of a widely shared desire for major change.”

This evening’s result represents in itself a stunning victory. For French and European leaders it is evidence of a great defiance towards them that they can’t ignore, and of a widely shared desire for major change

Once the results are confirmed, Macron will be the first French president to be re-elected in 20 years, and the first of any since the current voting system was established in 1962 to win another term while in full control of the government — previously re-elected presidents had been in “cohabitation” with prime ministers from rival parties dominant in the National Assembly.

But in line with nationalists and populists elsewhere, support for the French far-right has grown over the years and under Macron’s first term. Five years ago Macron beat Le Pen by 66 per cent to 34. In 2002, the centre-right incumbent Jacques Chirac defeated Le Pen’s father Jean-Marie Le Pen by 82 per cent to 18 after the Front National leader unexpectedly reached the second round.

Macron appeared vulnerable early in this year’s campaign. At one point his lead over Le Pen narrowed to within the margin of polling error, with his rival criss-crossing the country emphasising poverty and the cost of living while downplaying her divisive policies on migration, nationality and Islam.

In the first round on April 10, Macron took the lead with 28 per cent of the votes, ahead of Le Pen on 23 per cent and the far-left candidate Jean-Luc Mélenchon on 22.

Over the past two weeks, Macron and Le Pen have been courting Mélenchon’s 7.7mn voters, with Macron emphasising his green credentials and Le Pen her measures to support the working class by lowering taxes on food and fuel. 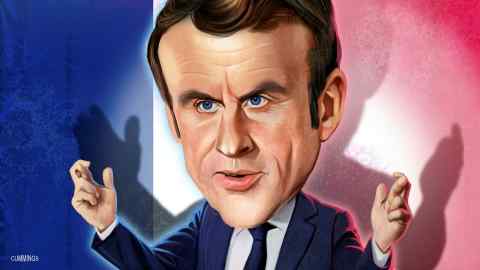 The 44-year-old Macron will now aim to secure control over the lower house of parliament in June, without which he will struggle to pass laws or implement reforms.

His first term was marked by the gilets jaunes anti-government demonstrations that began in 2018, then by the Covid-19 pandemic that swept across the world in early 2020, and finally by the invasion of Ukraine started by Vladimir Putin in February this year.

Macron’s first-term labour reforms and tax cuts were hailed by foreign investors and French businesses, as was his “whatever it costs”, EU-backed pandemic recovery programme to help employers and employees through the crisis.

Many of the French, however, say they detest Macron for what they see as his arrogance and lack of concern for the poor. The so-called “republican front” in which voters are supposed to keep an extreme-right candidate from power by choosing the other contender, however unpalatable, has eroded.

In the 16th arrondissement of the capital, where Le Pen gave her concession speech, longtime far-right voter Maurice Blanc said: “We must throw all our energies into the next battle for the legislative elections so as to be able to shape the fate of the country at this crucial time.”

Ringgit falls to new 24-year low as it touches 4.60 to US dollar

What stops you from investing